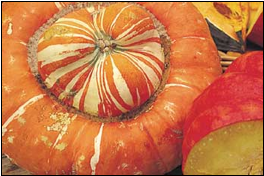 The Pumpkin Story – By John Gordon

Cucurbitacea are made up of about 114 genera with over 500 species. We will look at one genus and only four closely related species. Commonly they grow as vines and produce hard shelled fruit of various colours and shapes. A typical characteristic is having separate male and female flowers on the same plant. This means that another agent e.g.: wind, insect, animal or man is required to facilitate fertilization of the female flowers. Close relatives are watermelons, rock melons, cucumbers and some gourds.

Cucurbita with about six closely related species. Varieties can produce hybrids within and even between species. These species in which we are mainly interested are:

To confuse things zucchini are also members of the species C.pepo. Pumkins are very variable in size, shape, colour, taste, and growth habits

The C.maximum has very long vines with large round leaves with hairy stems. The stem of the fruit is round and corky. The seeds are thick and yellowish with cellophane like coating. This species has the greatest number of varieties. The following are only a few of those known and grown

There are variations on names as well so one known by one name could well be the same as one by other name or names.

There is not a lot of information of the C.mixta species which includes some Japanese pumpkins. The seeds are grey, gritty and ridged around the edges.

The leaves of C.moshata species have white patches on them. The stems of the fruit are smooth five-angles and flared towards the fruit. The best known variety of this species is the Butternut, but it does include the Trombone, Grammas and Crooknecks.

There are vining and bush types all with leaves like grape leaves. The stems and fruit are prickly with five angled stems. The seeds are small flatish and white with grooves around the edge. This species includes zucchinis which are really young marrows. Tromboncino and Black Beauty are two commonly grown zucchinis. The pumpkin types include:

Hopefully the above will be of interest.

One response to “The Pumpkin Story”

This is a new blog started in 2014 for the group. Previously resources were located at wikispaces.com
Our next scheduled meeting is 21 March 2021 - We will be maintaining Social Distancing guidelines